Concerning the taking back of the Bearpit by the Council

The Cube sculpture in the Bearpit has been removed without consultation or proper process.

This is suppression of a bold community experiment in common public space and cultural expression.

This is a fight for the soul of our City. Could the Bear be next? 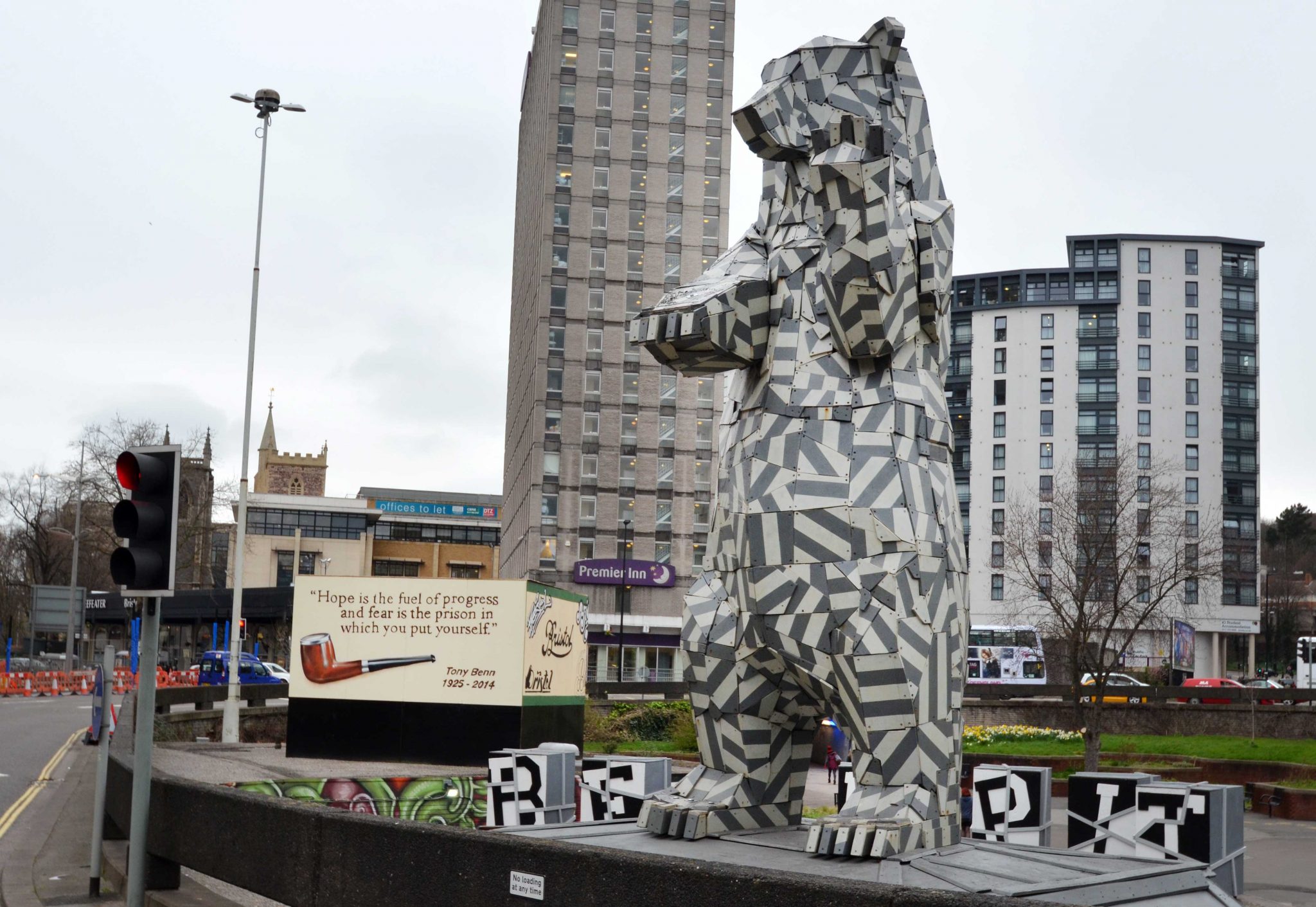 Seven years ago a brave social experiment was started in the Bearpit. A hitherto unloved and neglected space in the centre of a roundabout, known colloquially as the Bearpit, because of its raw qualities, was declared a “Community Action Zone” by Bristol City Council.

A social enterprise, naming itself the Bearpit Improvement Group (BIG) was formed, and the volunteer project began. Community volunteers put unending effort into creating what could become a community run public space, a true commons.

In 2016, the food traders working in the Bearpit set up a breakaway group “Bearpit Bristol” and have effectively worked to push out the community-based BIG. Bristol City Council and Bristol Waste have seemingly backed the traders over the community. Following a campaign of fear-mongering in the media by the traders, Bristol City Council announced that the social experiment was a failure. In early 2018 the Council, amid much confusion, said they would take back control of the Bearpit from the community group (BIG).

Since then Bristol Waste have painted the inner walls in monotonous grey and brown, removing artworks such as “Bridges not Walls” and “Deeds not Words”, works painted for Journey to Justice in late 2017. Inevitably this has provoked a response from graffiti artists and the grey walls are tagged constantly. Since this oppressive move by the Council, artists have been harassed and threatened with arrest by the police. No clear guidance has been issued or communicated to the community. 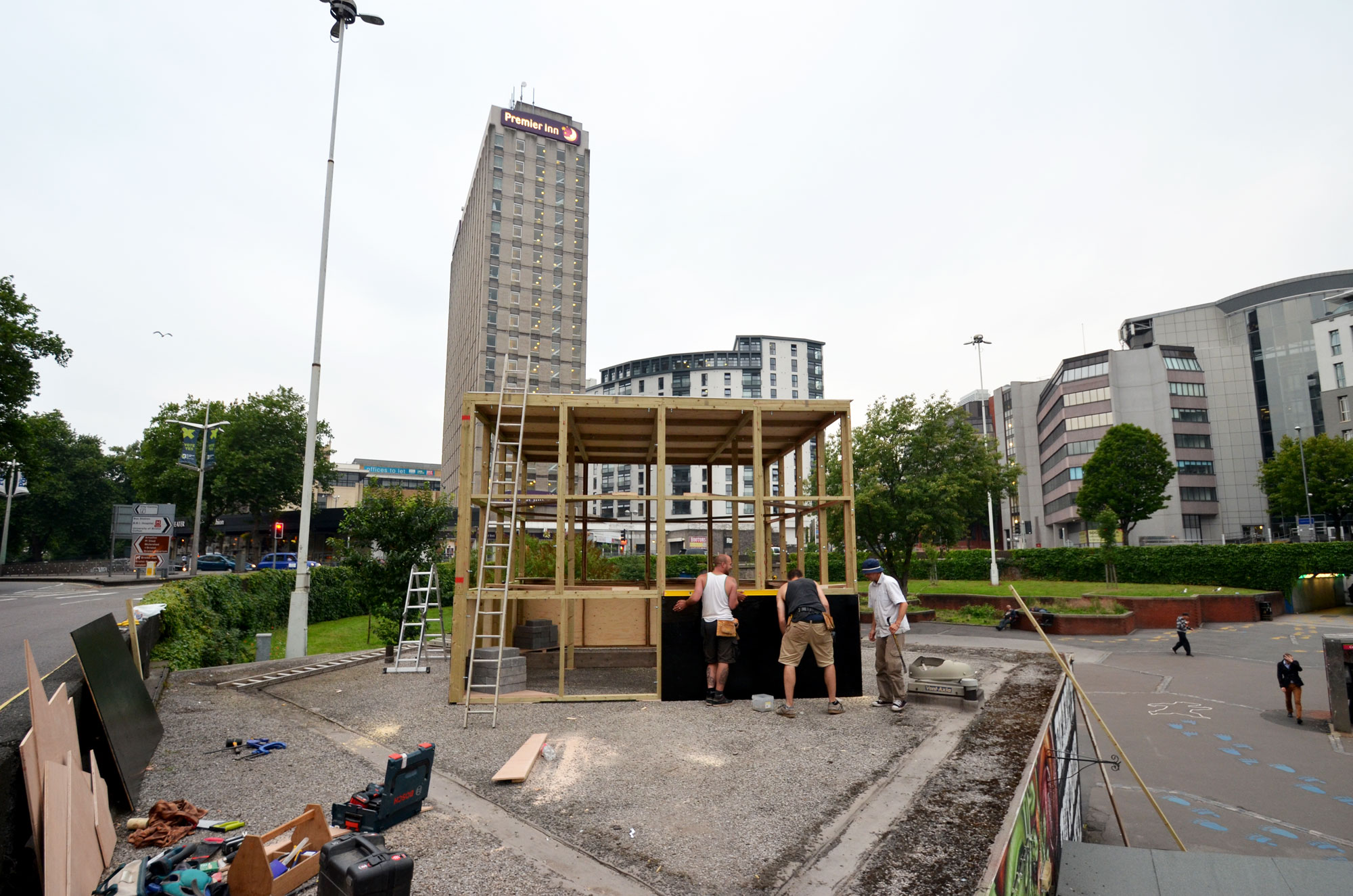 Last month on the Friday before Whitsun, the Cube sculpture which sat atop the now permanently closed ladies public toilets was removed by Bristol Waste employees, apparently under order from Bristol City Council. The 12ft high, 16ft wide wooden sculpture was erected with funding from the Arts Council in 2013 by PRSC and BIG. The Council Planning department told PRSC that its removal was nothing to do with them, though they had sent to PRSC a letter requesting its removal, the first stage in a long legal process. 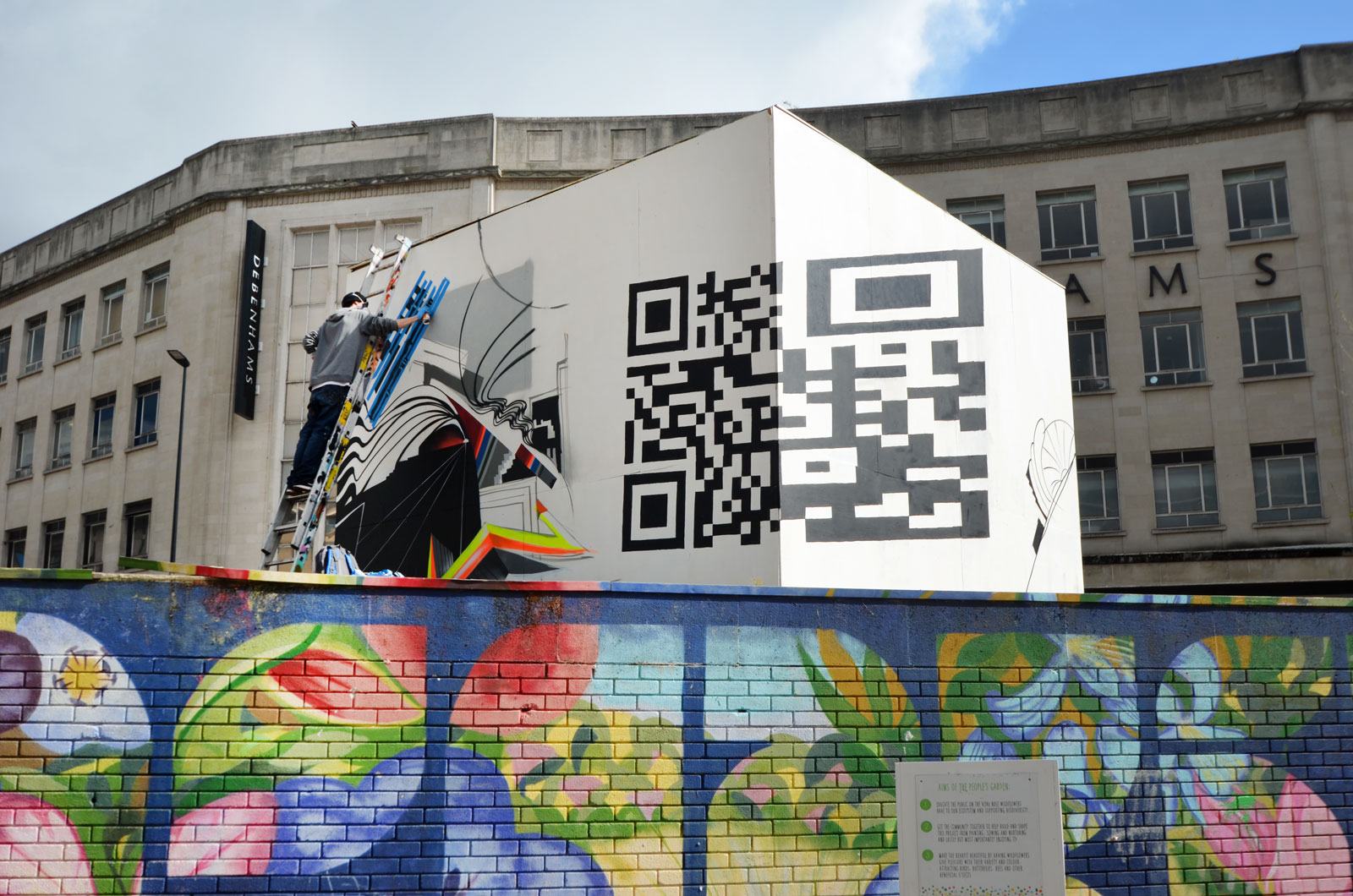 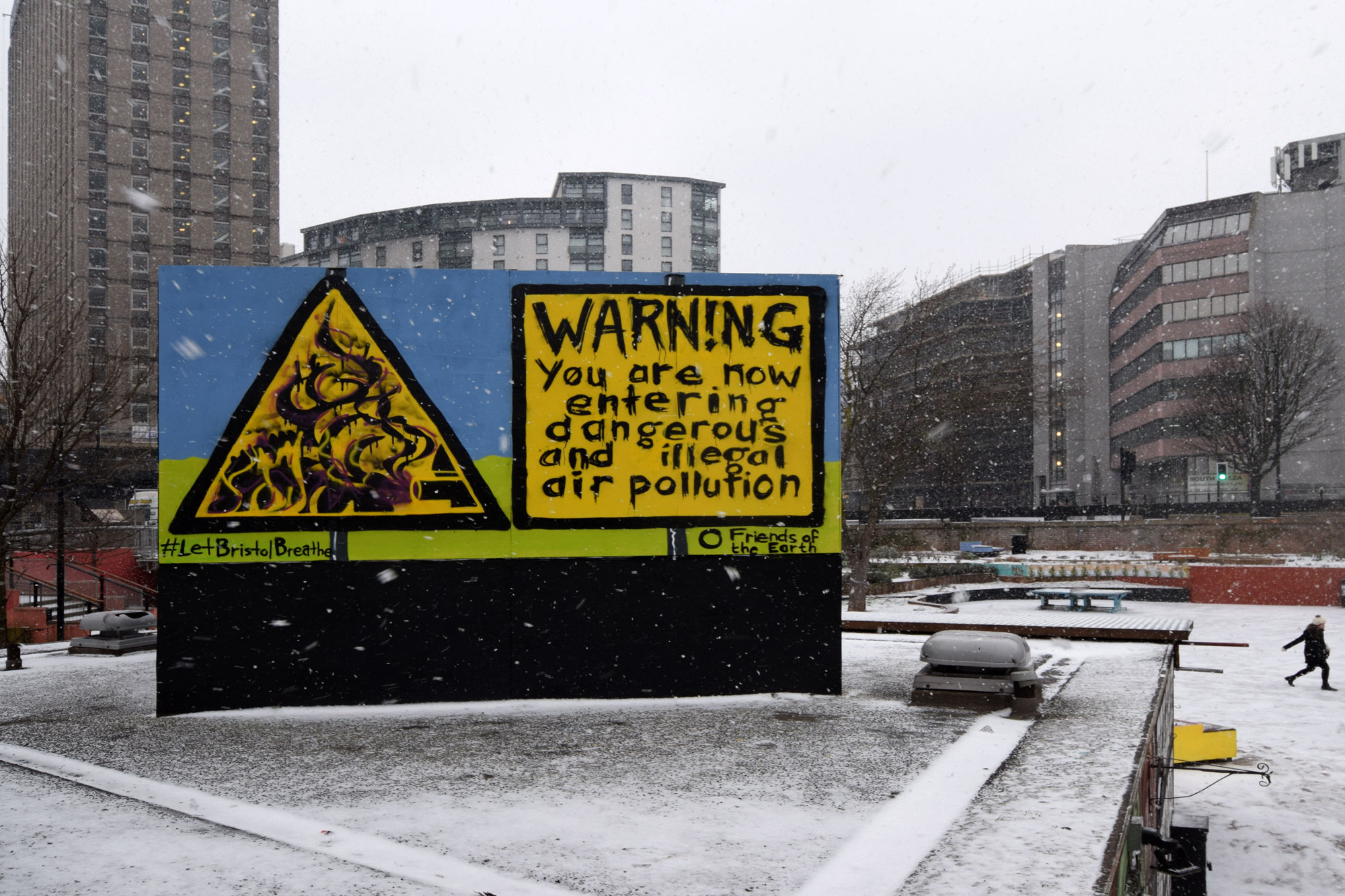 Friends of the Earth mural, the last work before removal

The removal of the Cube sculpture is a violation, a suppression of community voice and a dramatic escalation in the erasure of the Bearpit cultural experiment. 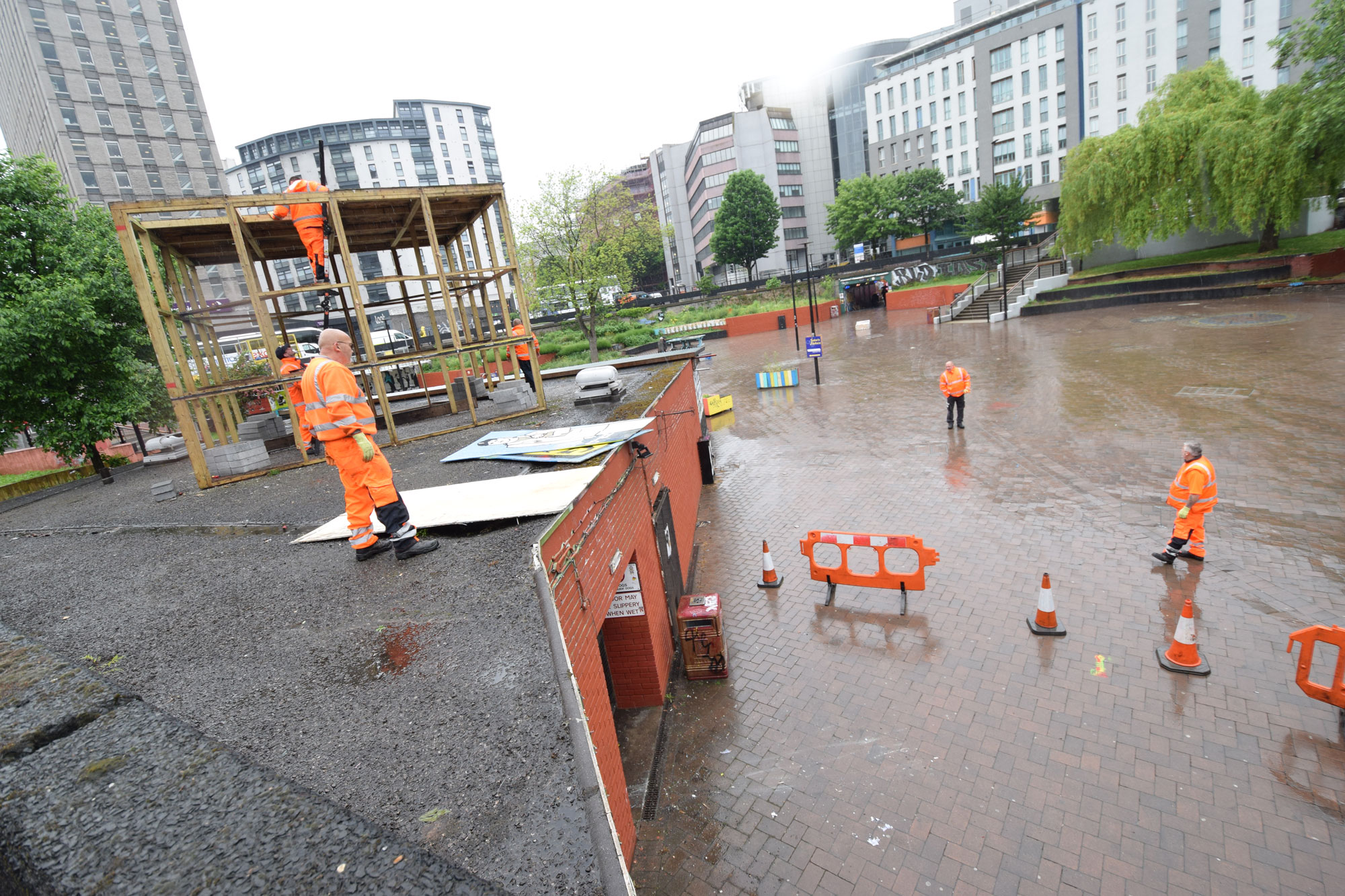 Removal by Bristol Waste in May 2018

The Bearpit is important for what it is, not what it might be. The social experiment is not a failure. The withdrawal of support by the Council is a rupture of faith with the volunteers who worked for seven long years. The suppression of local culture is disastrous, as our government erases the very thing that it professes to encourage. Experiments are messy and sometimes difficult. In the last years the creativity that has come from the Bearpit has been extraordinary. It has not been allowed to flourish. The problems of homelessness and addiction across the city have not been addressed, and hiding these issues from the public gaze is not a solution.

This aggressive sanitization of public space is shocking and unacceptable. You can’t have murals without accepting tags and allowing practice space: all art comes from somewhere. Scapegoating and ‘cleaning up’ street people does not make them disappear, or solve that issue. Painting the Bearpit grey and brown does not stop people tagging. The Commons are for everybody.

Even Bristol City Council’s own consultants agree on the importance of the messy and the avant-garde. See quote below from the Council’s own adopted report. 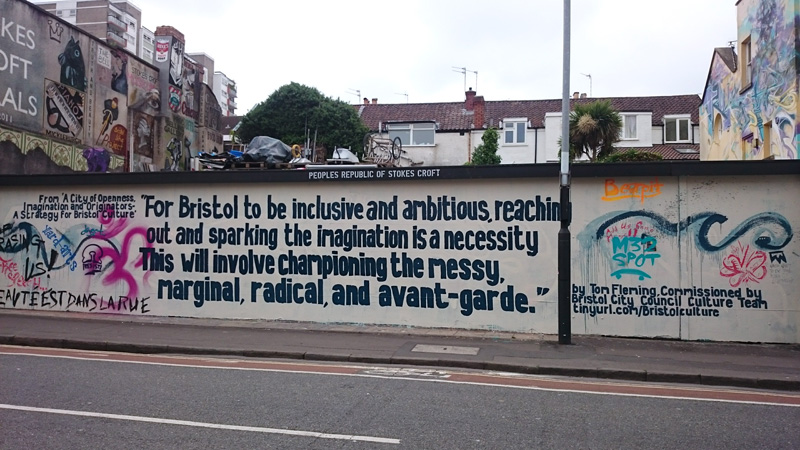 If you’re interested in these issues, come to the Cube cinema on 27th June at 7.30pm for a free evening of extraordinary Bearpit-related entertainment.