A free and creative commons

Culturally, St. James Barton Roundabout and Stokes Croft have similar roots. Known colloquially as “The Bear Pit” because of its fearsome reputation, this site has been a no man’s land since its creation. This area played host to the famous St. James Fair from the 12th Century. Traders traveled to the Fair from across the known world until it was closed down in the 1830s. The Fair was viewed by Corporation Authorities as a haven for ragamuffins and vagabonds, and, perhaps more importantly, it was extremely difficult to tax given the nature of the commercial activity that took place here.

The Bearpit is now a site of extraordinary experiment. In 2012 enlightened Council officials, in particular Graeme Sims who was then Deputy Chief Executive, declared the space a “Community Action Zone”, further adding that  they had no clear idea what that meant! From these interesting beginnings emerged the Bearpit Improvement Group, a broad based group of locals who took on the space, and presided over a refurbishment in conjunction with Bristol City Council. PRSC was deeply involved in the process: The space was truly experimental, a cultural “commons”, where we could experiment with different, incremental and gentle approaches to public space.

Over the years the Bearpit gained a number of refurbishments. This included its own mascot Ursa; an Outdoor Gallery and Community Cube, and an Open Air Theatre.

1) No infrastructure should be removed from the Bearpit until and unless an alternative plan for the Bearpit has been agreed through community consultation, and all planning permissions and a start date have been agreed.

2) The Bearpit should be taken out of the Broadmead Business Improvement District.  This change was instigated in November 2017 by persons unknown, without public consultation, and represents further corporate takeover of public space and should not be tolerated.

3) The idea of the Bearpit as a cultural creative commons should be revisited. Involving both cultural organisations such as  Arnolfini, Creative Youth Network, People’s Republic of Stokes Croft, Coexist, KWMC Arts Council England etc and Homelessness and drug agencies such as Transform, Bristol Drugs Project and Bristol Housing Action Movement. The survey carried out last year by the Arnolfini showed that what the people of the City want, above everything, is culture in their streets.

4) Adopt the idea of incremental change, as suggested by Henry Shaftoe, Founder of the Bearpit Improvement Group. Continue to adopt a low cost gentle bottom-up creative approach to the City’s most difficult urban space in a style that does not exclude its current inhabitants.

5) If Bristol City Council does, in its wisdom, decide that it wishes to remove all of the infrastructure from the Bearpit, then the Council must recognise its responsibilities, and enter into a negotiation with the stakeholders who have put in countless volunteer hours, and significant funds into the Bearpit.

The negotiation will include:

i) Compensation for time spent and costs of infrastructure placed in good faith in the Bearpit.
This will include compensation for the destruction of the Cube sculpture which was torn down under the orders of persons unknown without legal process in Whitsun 2018.

ii) Financial help in removal and disposal cost of all materials and infrastructure in the Bearpit. This will include costs of crane hire, road closure, transport and labour.

iii) Consideration of alternative space in the City for structures such as the Bear and the Theatre containers.  If all of the units, including the Council-owned bus are to be removed, then appropriate sites should be found for these units.  The bus is an original 1979 Bristol VR and is of historic interest to the city.

Released by Former members of the Bearpit Improvement Group and the Peoples Republic of Stokes Croft Jan. 2019

“At the end of last week the occupants of the Bearpit were suddenly evicted, and the whole space fenced off. We at the Peoples Republic of Stokes Croft were as surprised as anyone. Maybe more so, as Bristol City Council had signed documents with us, including guarantees that we’d be consulted throughout the process.” See full update here.

“In her justification of the order to remove Ursa the Bear and the community infrastructure, Craig referred to several incidents, at least two of which (occupation and arson in the closed toilets) happened after BCC “took back control” in early 2018 (and none of which involved the structures referred to in the petition). The statement from Inspector Mark Runacres of Avon and Somerset Police also referred to a rise in violent and anti-social crime, but covered a period which was mostly after BCC had taken back control.” See full response here.

As the growing effects of austerity caused increasing desperation, homelessness and drug addiction, and as Bristol Waste refused to be involved in maintaining and cleaning the Bearpit, it was clearly unfair to lay the blame for the messiness of the site on these underfunded and unsupported community groups.

In reality, the Bearpit experiment had been extraordinary, amazing and of rare vitality, and with a little support, it could still continue to be a truly groundbreaking cultural space. Our beautiuful uncommon commons! Read the full Manifesto here.

Former Bearpit Improvement Group vice chair Richard Jones said: “The petition simply calls on the Council to remove the threat to Ursa and the community units. She is a much-loved and iconic piece of public art and people are angry that the Council want to get rid of her. “Hundreds of volunteers gave their time over seven years to try to make the Bearpit a better place, but Bristol City Council have shown a high-handed approach by issuing legal notices without consultation. Read the full article here.

In 2016, the food traders working in the Bearpit set up a breakaway group “Bearpit Bristol” and have effectively worked to push out the community-based BIG. Bristol City Council and Bristol Waste have seemingly backed the traders over the community. Following a campaign of fear-mongering in the media by the traders, Bristol City Council announced that the social experiment was a failure. In early 2018 the Council, amid much confusion, said they would take back control of the Bearpit from the community group (BIG).

Since then Bristol Waste have painted the inner walls in monotonous grey and brown, removing artworks such as “Bridges not Walls” and “Deeds not Words”, works painted for Journey to Justice in late 2017. Inevitably this has provoked a response from graffiti artists and the grey walls are tagged constantly. Since this oppressive move by the Council, artists have been harassed and threatened with arrest by the police. No clear guidance has been issued or communicated to the community. Read more about this suppression of a bold community experiment in common public space and cultural expression.

Who has control over the visual realm of the City? And what does it say about Bristol City Council when it goes out of its way to remove the most significant non-corporate billboard in the City whilst it tolerates many corporate billboards that have no planning permission.

Just before Whitsun in 2018, The Cube sculpture in the Bearpit was pulled down by Bristol Waste, under the instruction of Deputy Mayor, Asher Craig. This was carried out without consultation or proper process.

A number of people, including Asher Craig (Bristol Labour Councillor), Martin Fodor (Bristol Green Party Councillor) and Robbie Gillett (AdBlock Bristol) have since then discussed the issue of the Cube on BCFM Radio, presented by Tony Gosling.

Normal procedure for pulling down a structure in a public space, would be to serve an enforcement notice to the owners of the structure, in this case PRSC.

Martin Fodor, former chair of several Bristol planning committees, agrees that this did not happen. He adds that this is quite unusual; Bristol City Council usually goes out of its way to enable someone to gain permission for a development.

Craig: “On the one hand people say you can’t have advertising in the City but hey, allow us to have our own advertising space.” Recently there were over 50 planning applications for digital billboards in Bristol city centre alone (read here and here), and this is not counting the existing hoardings. It is an understatement that the ratio of corporate vs. non-corporate hoardings is unbalanced.

To repress one dissenting community voice does beg the question who the Council favours. With a track record featuring art (Tom Sledgemore, UWE student), protest (dangerous air pollution), community support (Save the NHS), and exhibitions (Journey to Justice, Resiste) the Council is actively repressing the voice of the people and organisations without corporate money.

In October 2018, without prior discussion of any kind, Bristol City council served legal papers on The Bearpit Improvement Group (BIG) and Peoples republic of Stokes Croft (PRSC) for removal of all assets from the Bearpit.

A petition was set up to “SAVE OUR BEAR”. The sculpture has become an important symbol, well loved by the City’s residents. The petition got more than 3500 signatures, and is discussed by Bristol City Council on 15th January 2019. 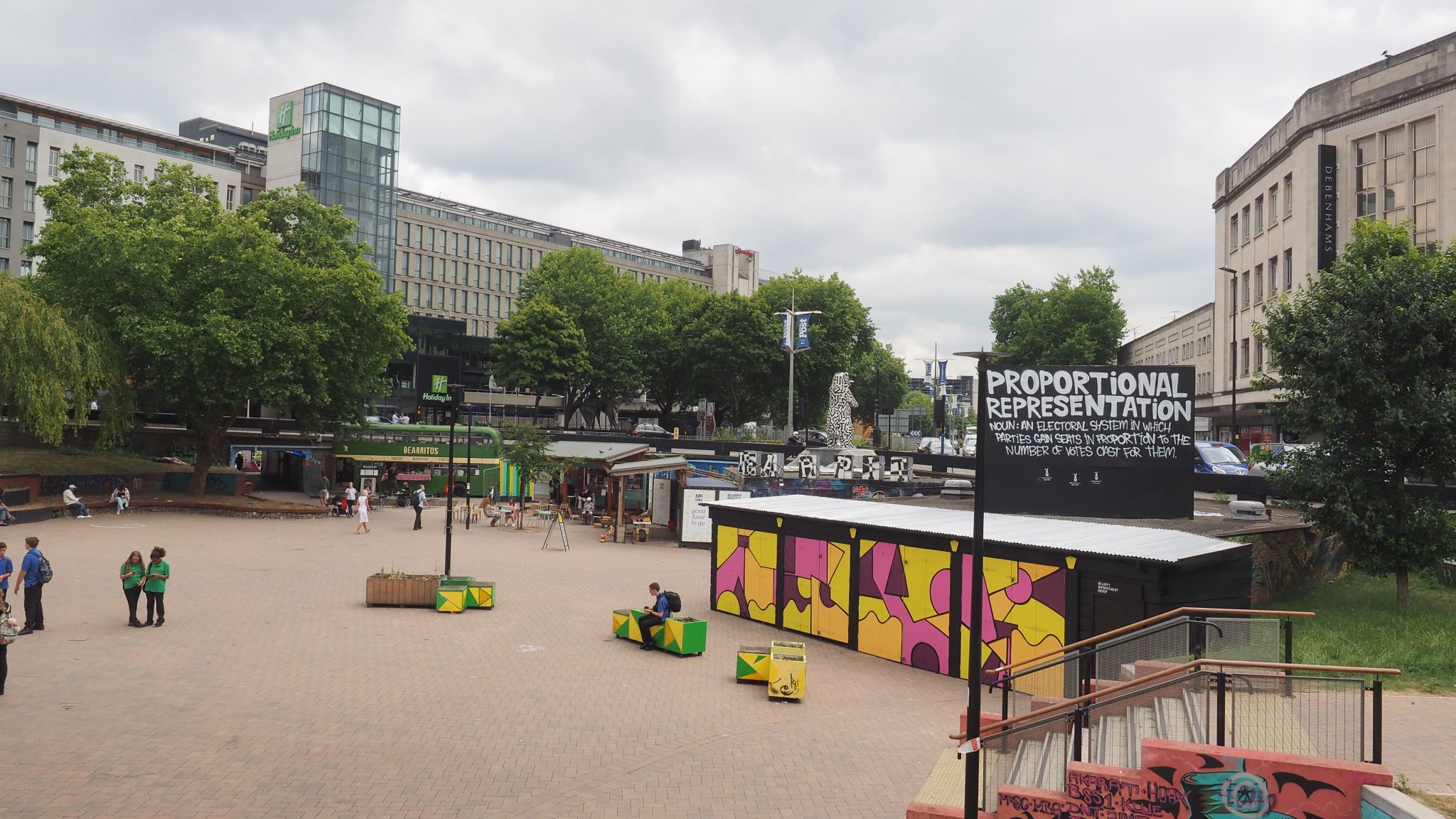 The Bearpit seen from the Open Air Theatre. In the far corner Ursa looks out over the traffic coming into Bristol, with on the right the Bearpit Cube. 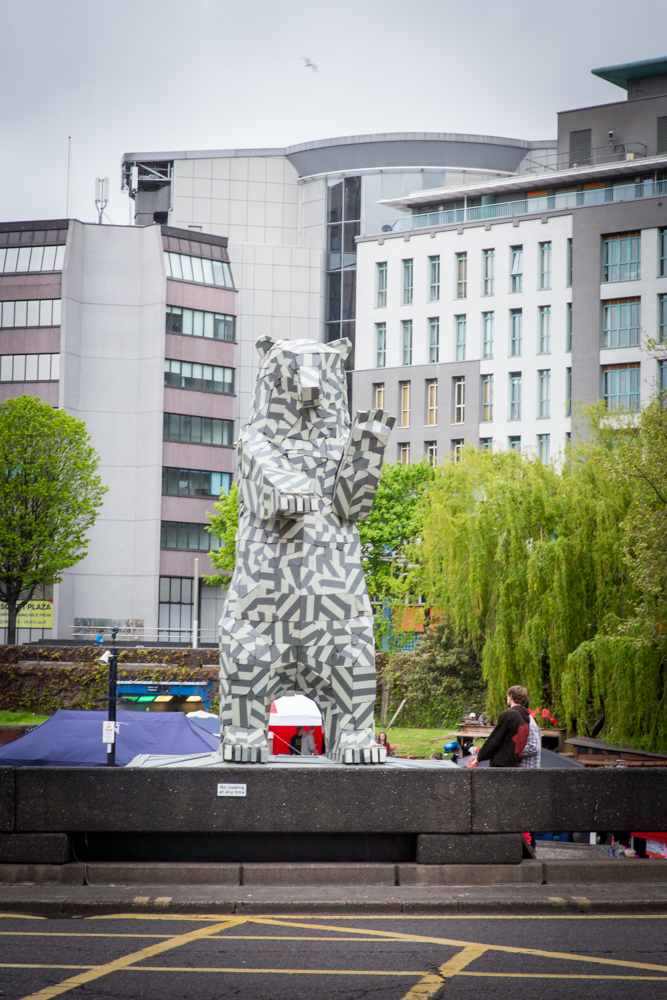 “Ursa”, a major work by Jamie Gillman, unveiled in the Bearpit on 10 May 2013. Symbolic of the Bottom up approach to regeneration for which Stokes Croft is increasingly renowned, the bear stands on the roof of the men’s toilets in the Bearpit, a potent emblem for the Bearpit and the City. Read about the unveiling here and here. 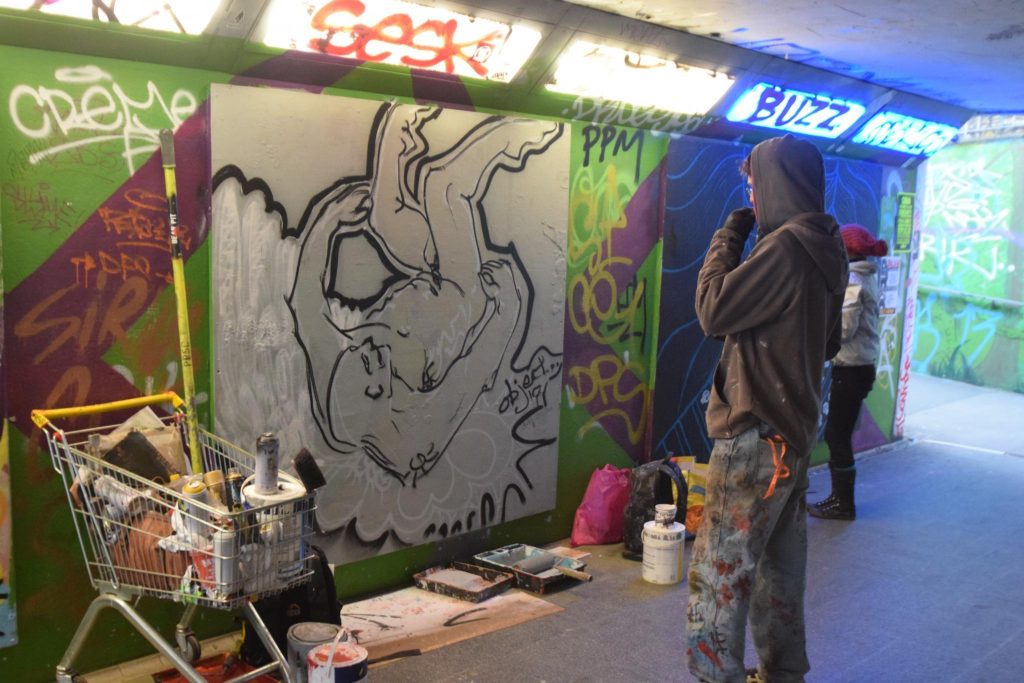 By gentle incremental change in our public spaces, curated by and involving local people, the Bearpit Outdoor Gallery opened with its first art exhibition in October 2011. In opening up the tunnels for artists and decriminalising the Bearpit as a paint zone, the tunnels become a gallery and a resource. The Bearpit Outdoor Gallery has hosted exhibitions such as ‘How Does an Activist Eat Potatoes?’ in 2013 and ‘Resiste’ in 2016. In 2017 it hosted the ‘Voice of the Past’ exhibition, organised by PRSC in collaboration with Journey to Justice Bristol and the Creative Youth Network. 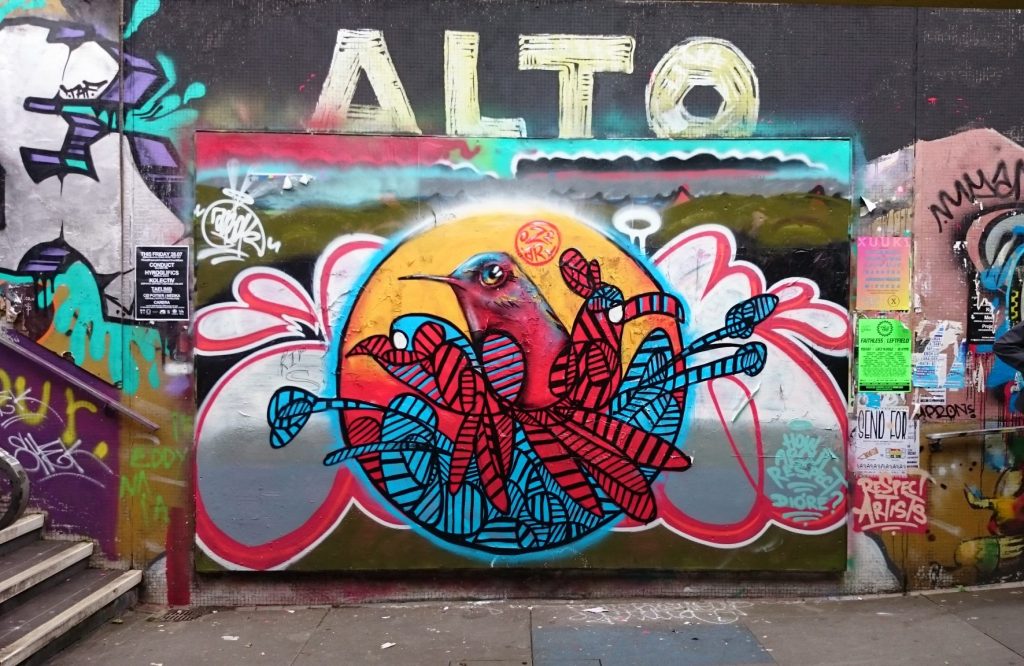 The Bearpit Cube in the heart of Bristol is about Voice: It is seen by all who pass through. Where public space is continually eroded, the relative freedom of the Bearpit, which is hard-won, offers hope. The Cube is sometimes part of an exhibition in the Bearpit Outdoor Gallery, sometimes it is a standalone message. Its messages have been inspired by the NHS, TTIP, climate change, electoral reform, AdBlock and more. 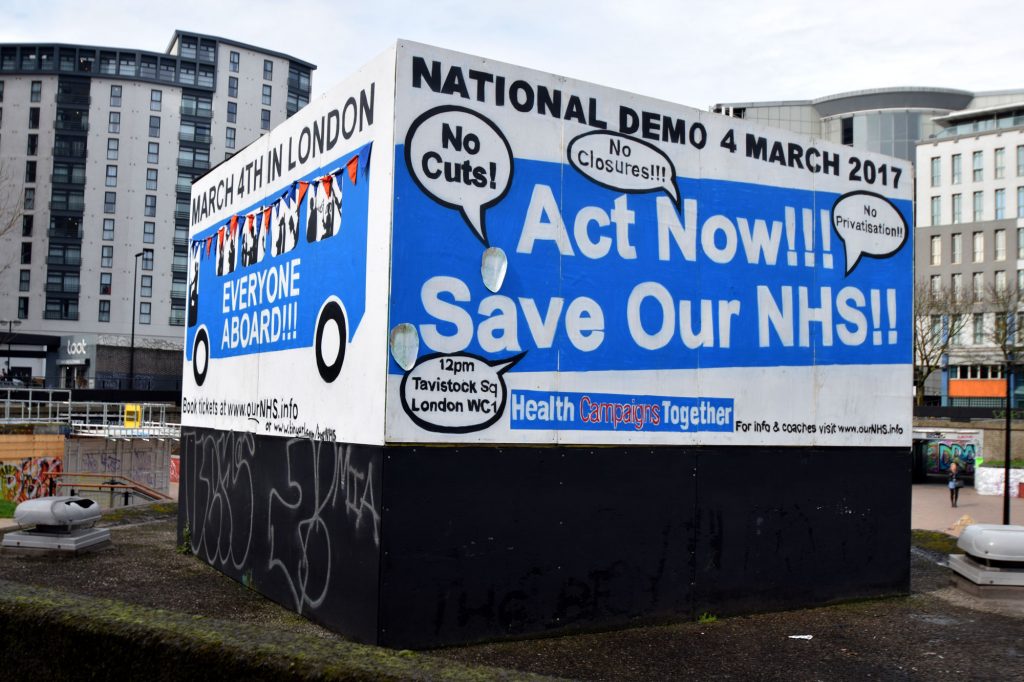 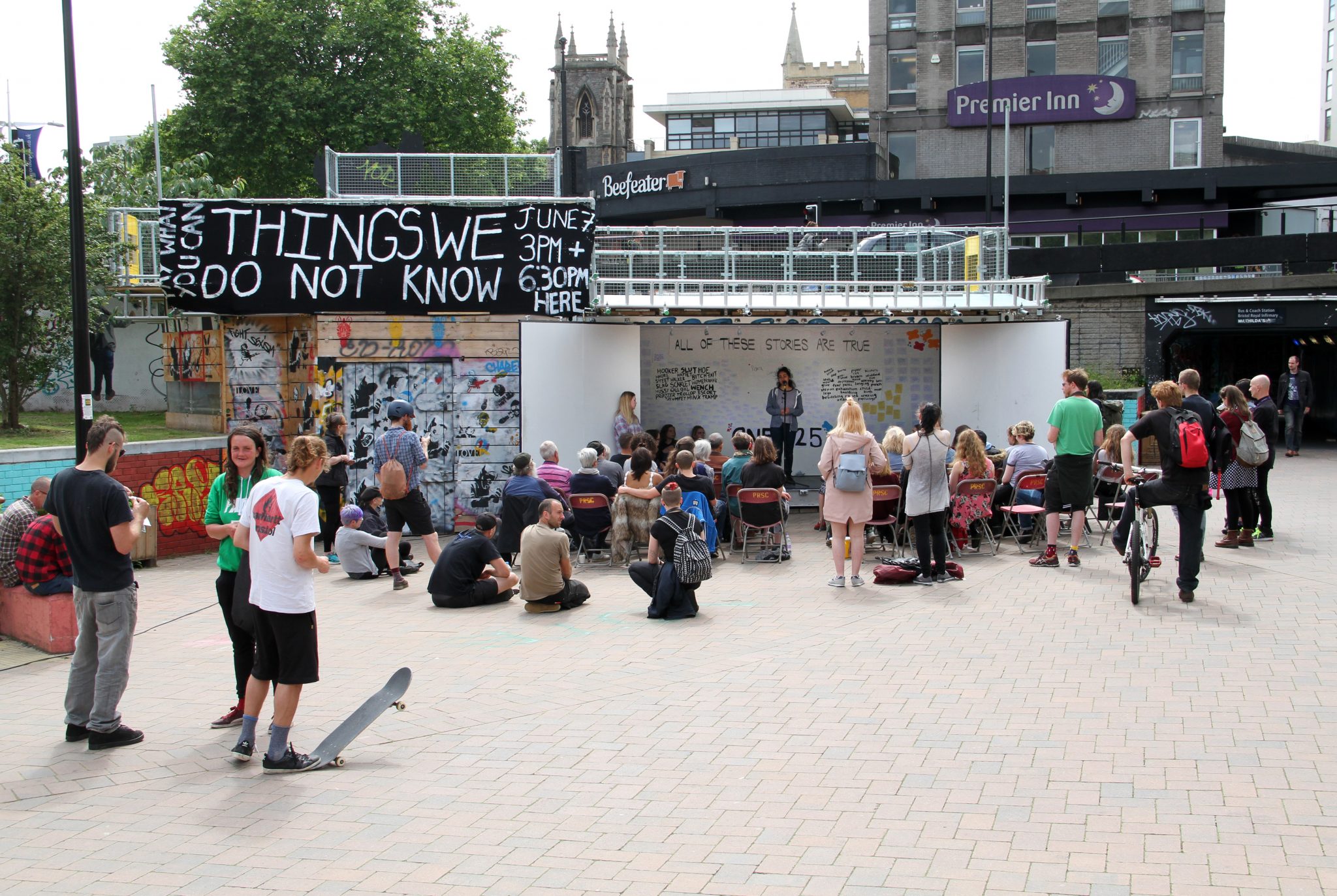