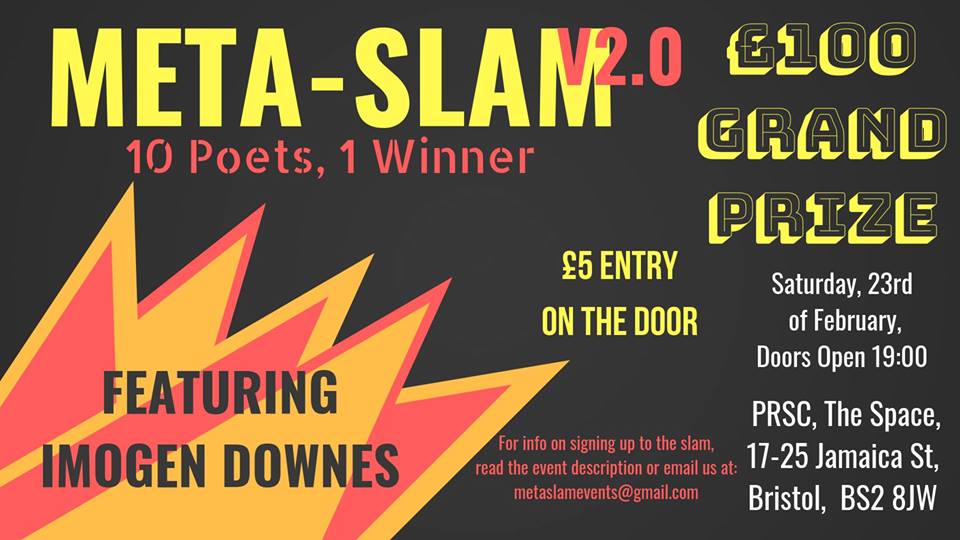 Meta-slam: A slam that aims to refine the Poetry Slam into a well oiled machine, with no score creep, real judges and a cash prize for the winner.
Updated ruleset, new visuals, faster runtime, better content, expect updates of this size and magnitude every time a new Meta-Slam roles around, a trend we’re starting with Meta-Slam 2.0!

Meta-Slam is a competition where 10 poets will be randomly selected from a pool of applicants to compete for £100 in prize money, using nothing but their words, their wits and their ability to impress our 3 judges.

After 2, 5 person heats, the winners of each heat will go head to head in a climactic final round to become our Meta-Slam champion!

Also joining us as our headliner for the evening, it’s Imogen Downes!

Imogen is a poet, writer, and theatre maker from Bristol. She has worked with Rife Magazine, Bristol Old Vic and Cheltenham Literature Festival, and was named as one of the most influential young Bristolians of 2018. Her work has been shared in a number of venues across the UK, and is influenced by the rawness of performance poetry and her experiences as a young woman. Having developed from a background in theatre, she draws on her experiences in storytelling and playwriting to create a strong blend of engaging performance and powerful writing. Whether humorous or cuttingly serious, Imogen’s work always aims to reveal something about the human condition; transcending everyday experiences to lay bare what it means to be human and to be treated inhumanely.

Entry is £5 on the door for everyone, competitor or not, so tell your friends and come share an amazing night of poetry with us.

Want to enter the slam? Here’s a few things to know:

To enter, competitors pay £5 and bring a named audience member. The “buddy” that you’ll use as a reference must be included in your initial sign up email and CCd into the email chain so we can verify their validity. Once we’ve confirmed their attendance you will be entered into the draw. If you turn up on the night without your buddy you’ll still be able to perform but will be disqualified from the competition.

This is a new rule we’ve implemented for safety reasons, so that everyone can be accounted for and to avoid incidents similar to one we had at our first event where a competitor turned up from across the country with no means of transport to get home and nowhere to stay, leading us to have to take responsibility for them for fear of their wellbeing if we did not (which is something we really should never have had to do).

Just send us a message at email hidden; JavaScript is required with your name and preferred method of contact, after which we’ll let fate decide our slammers during our “random pick live stream” later this month….