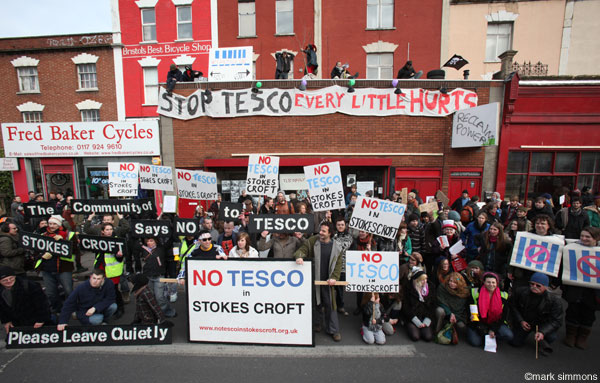 Ten years ago Tesco sneakily gained planning permission to open on Cheltenham Road, inspiring the No Tesco in Stokes Croft campaign. Tesco still opened, but without late opening or a liquor license, thanks to the local campaigners. Fast forward to today, Tesco are at it again, with applications in for both late opening (until 11pm daily) and liquor sales! Clearly they think enough time has passed now that no one will notice if they get the rules changed.

If you wish to object to this process you need to submit objections to email hidden; JavaScript is required by Tuesday January 12, quoting application number 20/05171/PRGRT. You can also request permission to speak at the alcohol licence decision meeting.

Here is how you can quickly edit the template below to make it more personal and impactful:

The following four objections relate to the four criteria the Council will use to decide whether the grant a licence, plus the issue of ‘Cumulative Impact’.

In any extra arguments you make, remember it has to relate to the sale of alcohol at the premises, or the committee will not take it into account.

There are a large number of bars, clubs, take-aways and off-licences within a short walk of this branch of Tesco. Because of this existing high concentration of licenced premises, until a recent change in national licensing law, the majority of this area was covered by one of two Cumulative Impact Areas (CIAs), on Gloucester Road and Stokes Croft.

Although the change in the law has removed these CIAs, the licensing committee can still consider the cumulative impact of all these premises. Please do so.

2) Prevention of crime and disorder

This application disregards the serious street drinking problem in Stokes Croft. The problem is so bad that in 2010 police had to introduce a ban on the sale of strong alcohol on Stokes Croft. (https://prsc.org.uk/police-work-with-shopkeepers-to-amend-licenses-to-forbid-retail-of-high-strength-lagers-and-cider).

Stokes Croft and the surrounding area is where many of Bristol’s drug, alcohol and homeless support agencies are based, their location being both a response to and an attraction for many homeless people in the area, many of whom have severe alcohol and drug addictions.

Another licence in the area would make this even more of a hotspot for street drinkers, increasing crime and disorder in the area. While I sympathise with the difficult lives that many street drinkers have had, unfortunately when intoxicated they do often cause crime and disorder issues, to the detriment of themselves and others. This threatens the special independently-minded community that I love in this area of Bristol.

Tesco’s application offers nothing to counter this problem – all wording in the application is their standard wording, demonstrating that the applicant has taken no account of the circumstances in this location.

In 2010 the Police objected to the license application by Tesco at this premises because of the risks to the public. I hope they will do so again.

Stokes Croft and Cheltenham Road are already not the safest places to be at night, because of the level of alcohol abuse that takes place in the area.

[Add your own story of a scary/dangerous experience you or your friends have had on the road as a result of the availability of cheap alcohol from off-licenses in the area.]

‘Pre-loading’ is a common phenomenon where people buy cheap alcohol from a retailer like Tesco, get very drunk at home or in public spaces, and then go out into bars, pubs and restaurants. This is done to save the individual money, but it has a detrimental effect on other local businesses and their customers. For instance, Canteen, a popular bar/restaurant nearby, had strong objections to the licence application in 2010 on the basis that they already have frequent problems with customers who have ‘pre-loaded’ on cheap supermarket booze. This creates an unpleasant atmosphere for other customers and encourages the drinking of alcohol by those who would not normally want to drink much but who feel uncomfortable in these venues unless under the influence of alcohol.

A nuisance would also be caused by litter from the Tesco store. This stretch of road is already plagued with discarded cans and broken glass, presenting a danger to pedestrians and cyclists who use the road. Bottles and cans of alcoholic drinks are a common type of litter in the area, so another off-licence is likely to add to this problem.

5) Protection of children from harm

Dolphin School is only 150 metres away from this Tesco store, and Colston’s Girls School is 300 metres away. Cotham School is also nearby. Hundreds of schoolkids walk past and shop at this the Tesco every day. The ‘Think 25’ initiative is helpful but is not perfect. I am worried that school children will be regularly exposed to adverts for cheap alcohol on their way to and from school, and may be tempted to buy some or ask friends to buy for them. 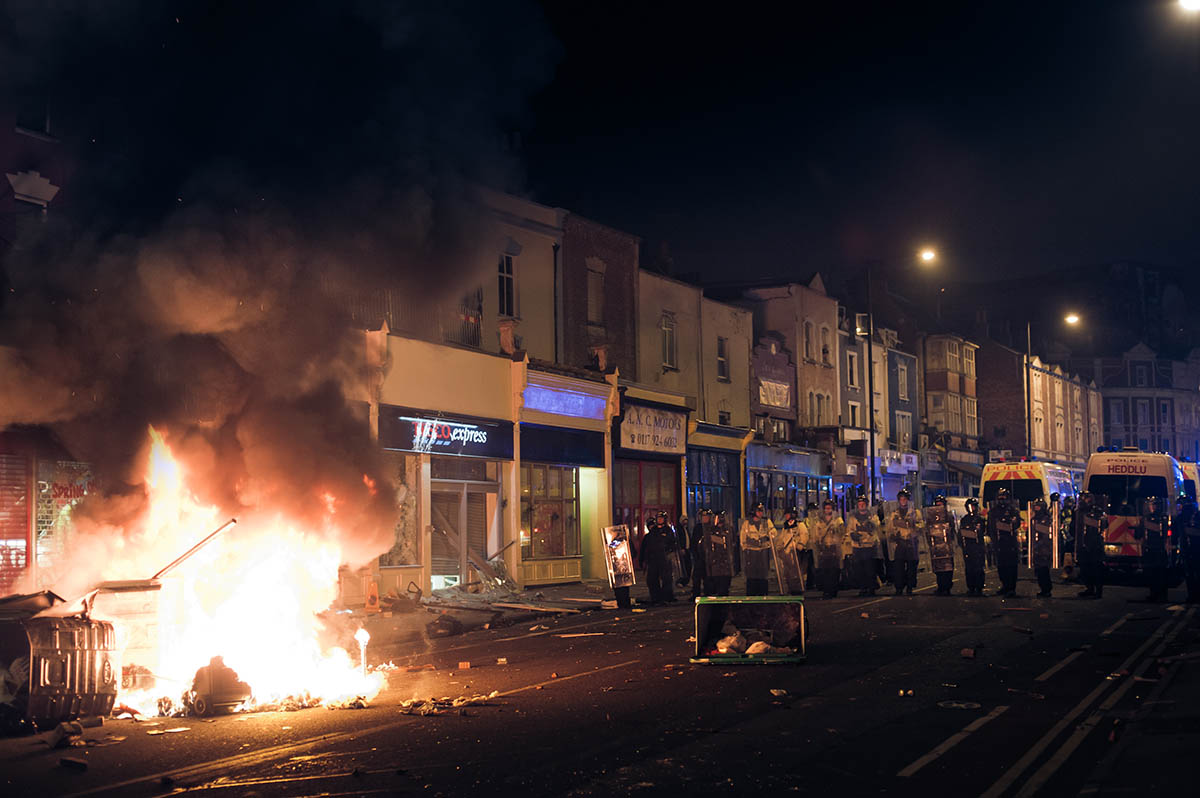 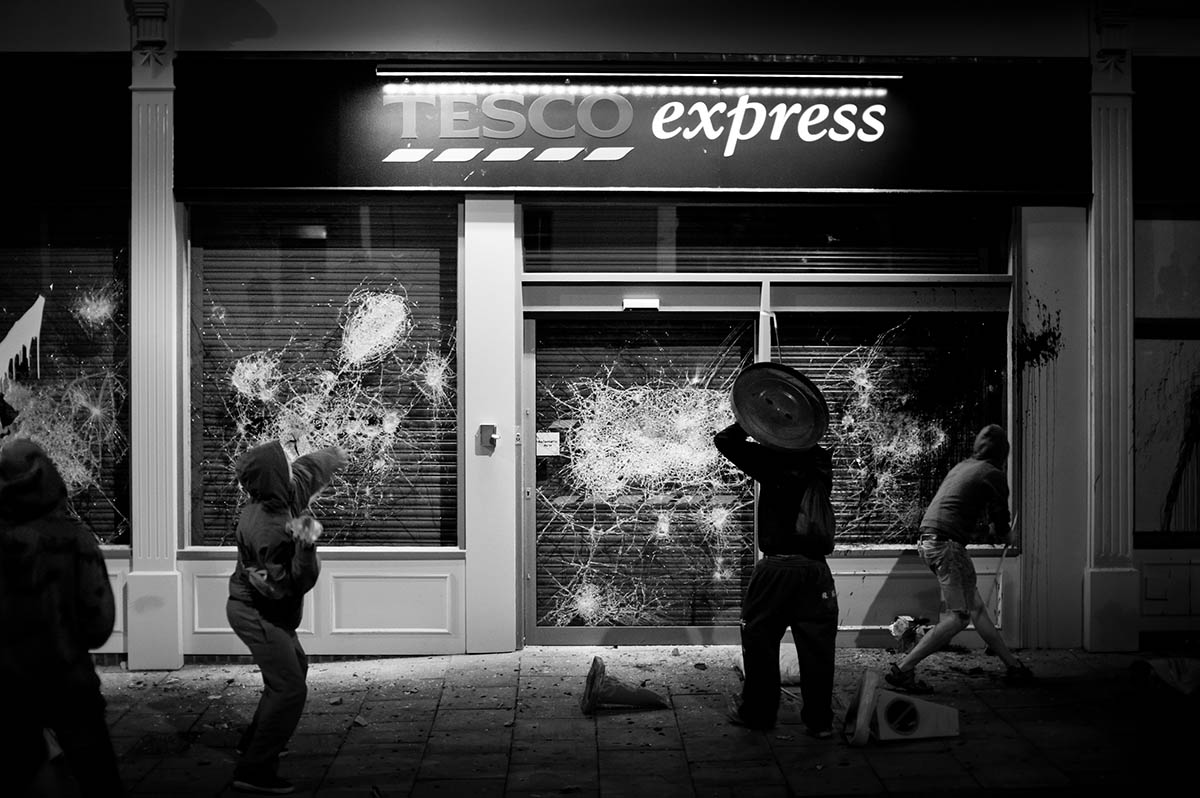 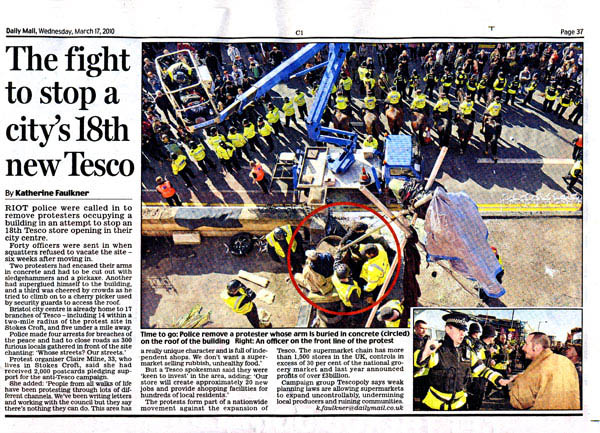